The scene seems to be involving a group of people trying to break into the Tate Modern Gallery, which leads to a police chase.

Check out the pictures:

According to Deadline, Apple TV+ has announced its first Anglo-French original, starred by Eva Green and Vincent Cassel.

“Liaison is a high-stakes, contemporary thriller exploring how the mistakes of our past have the potential to destroy our future. The series combines action with an unpredictable, multi-layered plot in which espionage and political intrigue play out against a story of passionate and enduring love.”

The thriller series is co-produced by Newen’s Ringside Studios and Leonis Productions.

The Luminaries, the British/New Zealand drama starring The Knick’s Eve Hewson and Sin City’s Eva Green, has been picked up by Starz.

The premium network will premiere the six-part series, which is based on Eleanor Catton’s book, on Sunday, February 14 at 9:30 p.m. after Men in Kilts: A Roadtrip With Sam and Graham. You can watch a trailer below.

The series follows defiant young adventurer Anna Wetherell (Hewson) who has sailed from Britain to New Zealand to begin a new life. There she meets Emery Staines (Himesh Patel), an encounter that triggers a strange kind of magic that neither can explain. As they fall in love, driven together and apart by fateful coincidence, these star-crossed lovers begin to wonder: do we make our fortunes, or do our fortunes make us?

Last year, Hewson told Deadline that The Luminaries is indicative of the global explosion in content that has helped give rise to better roles for women. “There are so many female-driven parts that are really good, complex and different,” she said. “We have a long way to go, in terms of diversity and gender roles and equal pay, but it is changing and changing rapidly. I feel lucky to work in the #MeToo era.”

Paradoxical star, she conveys in spite of herself a very cinematographic mystery. Starring in a British miniseries, The Luminaries, the actress also longs for an eco-friendly life on an Irish farm.

During lockdown, Eva Green was in London, at home, then in Normandy, with her mother. We reach her by phone in the Alps, where she recharges herself, “walks and meditates” (“God lives in the mountains”, she assures us) before reaching Tuscany, where her sister, Joy, the another element of Marlène Jobert’s famous twins. Eva Green is still on the loose somewhere in the world, in Tanzania or Bhutan, where she goes hiking alone, or in New Zealand, where she filmed The Luminaries, a British mini-series set on the gold rush (soon to be released in France). Is she running away from her chronic anxiety? Or does she simply needs to confront strong emotions, saying she is “too shy and reserved, except in the screen”?

No one is more discreet and mysterious than this remarkable actress who dribbles into American films and disappears from the celebrity radars between two projects. Paradoxically, she switches from small independent films and Tim Burton’s blockbusters, whose she is the supposed gothic muse (they have done three films together). Eva Green does not squat red carpets , does not clutter the front rows of fashion shows and does not sell herself on any Instagram account. No one knows if she has a boyfriend , and no one wants to disturb the seeming quiet of her private life.

She is an actress with the physique of an old-fashioned femme fatale – pin-up curves and deep imperial voice -, an obsessive worker – she is notoriously very good at accents – and a touching young woman, who gets easily scared, and has recently turned 40 years old, which does not delight her. For Madame Figaro, she lent herself for a bucolic photoshoot, at the opposite extreme of her image of a dark creature with jet-black hair and red lips. Having the chance of doing things right, Eva the fervent dreams of a farm in Ireland, which would fulfill her passion for nature and animals and which would take her away from the cinema’s backyard.

Madame Figaro: These photos show another side of you, bright, solar and green…
Eva Green: My involvement is growing. Global warming and the degradation of the planet have accelerated since my childhood. In addition, the period of lockdown was revealing: many people finally realized the gravity of the situation. I recommend everyone to learn, read, take responsibility: reduce greenhouse effects, focus on renewable energies. Everything starts on a small scale: doing small daily actions, giving up certain products, certain foods, and learning to recycle.

Personally, nature has a very particular effect on me, soothing, even saving: it anchors me to the Earth, makes me more active, more realistic. My short-term life plan: a farm, probably in Ireland. It’s not an acting whim, it’s a very deep aspiration that I’ve been thinking about for quite a few years. Permaculture is a subject that interests me, and I also have the idea of raising alpacas because I passionately love animals. I am seriously considering a business that would be both green and profitable.

MF: Is it compatible with being an actress?
EG: With the Covid-19 crisis , we realized that everything was fragile and vulnerable, especially my job. Everything stopped, and I will not work again before 2021. The world of tomorrow? I hope I’m wrong, but it already seems quite chaotic to me. How do you stay positive when everything seems to be wavering? For my part, I try to swim in troubled waters and not be overwhelmed by spleen or anger.

MF: Do you still suffer from anxiety?
EG: This time around, there are objective reasons to be concerned. We all went through a period of astonishment, of paralysis, then we had to put things into perspective. Meditation has helped me a lot . But, regardless of these extraordinary circumstances, I have a worrying nature, and nothing really reassures me.

MF: However, you did not choose the most stable job…
EG: Yes, it’s a disaster. I have the impression that when I return to work, I will have white hair! At the moment, I find it difficult to concentrate on my job. I am in “purgatory” mode (laughs.) And yet, I viscerally need cinema. Cinema makes me feel alive and conquer my fears. In life, I am coward and very reserved. In cinema, I get active, I prepare myself physically – as with Dumbo , when I learned the trapeze -, I do research, I work on accents.

MF: Is cinema more interesting than life, as Truffaut asserted?
EG: Yes… well… I do violence to myself to make my life more interesting. As a child, I felt like I was living in someone else’s dream. I was lunar, I had the feeling of floating. This is the reason why I am so attached to nature: I absolutely have to be connected to the earth. This is also why I do a lot of sports: I like to work out, to sweat. And we cannot be happy if we are not anchored.

MF: You just celebrated your 40th birthday…
EG: I won’t say that makes me happy. That’s a big number, and a big push for an actress . Birthdays are not my thing. I prefer to celebrate my mother’s.

“In this job, when you are not wanted, you no longer exist”

MF: Do you receive a lot of scripts?
EG: My agent filters them. I no longer want to play all these dark and beautiful characters , the femme fatales, the seductresses. Unfortunately, there are fewer and fewer interesting films being edited, and independent productions are in decline. Today, creativity has shifted to TV series.

MF: You have joined the MeToo movement . Where is it today?
EG: Everyone is revolting, we hear the voices of minorities, and it is very healthy. We must constantly continue the fighting. I have the impression that women are listened to more, more believed, that there are fewer obstacles to lodge a complaint, for example.

MF: Yourself have been harassed by Harvey Weinstein…
EG: Yes, but I may have lacked courage, I was not one of the first to speak. But we were so scared! He was untouchable and his power was immense. When the time came, I defended myself, but I was traumatized and I spent a lot of time running away from it. It was absolutely necessary to avoid it, and I would go on a trip as soon as it appeared. But it was endless: the more you resisted him, the more excited he was – mentally ill. Our roads no longer crossed.

MF: Have you been the victim of discrimination?
EG: As a woman? As a French? I don’t feel like it, even though we actresses continue to be paid less than actors . On the other hand, if we evoke the castings, it is monstrous. We are cattle, we cry a lot, it’s very violent. I am fortunate to not do it anymore. Sometimes I’m asked for tests, but in this case I film myself at home and send a recording. In this profession, we are challenged by each new project. And when we are not wanted, then we no longer exist. It’s awful to depend on the others’ desires, and frankly, you never get over it. The only solution is to find other areas of interest. Hence my agricultural project…

MF: The new James Bond, the last one with Daniel Craig , is coming out soon. Rumor is that there is question about Vesper Lynd, the famous Bond girl you played, 007’s great love, who drowned at the end of Casino Royale…
EG: Really? It’s my most famous film. It’s a beautiful film, the character is complex, and that was an important springboard. But I’ve done so many other things since then. In the United States, people keep telling me ” I love your movie “, as if I had only shot one… 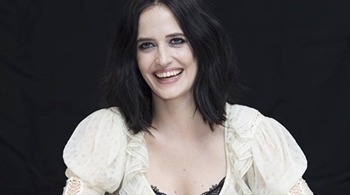